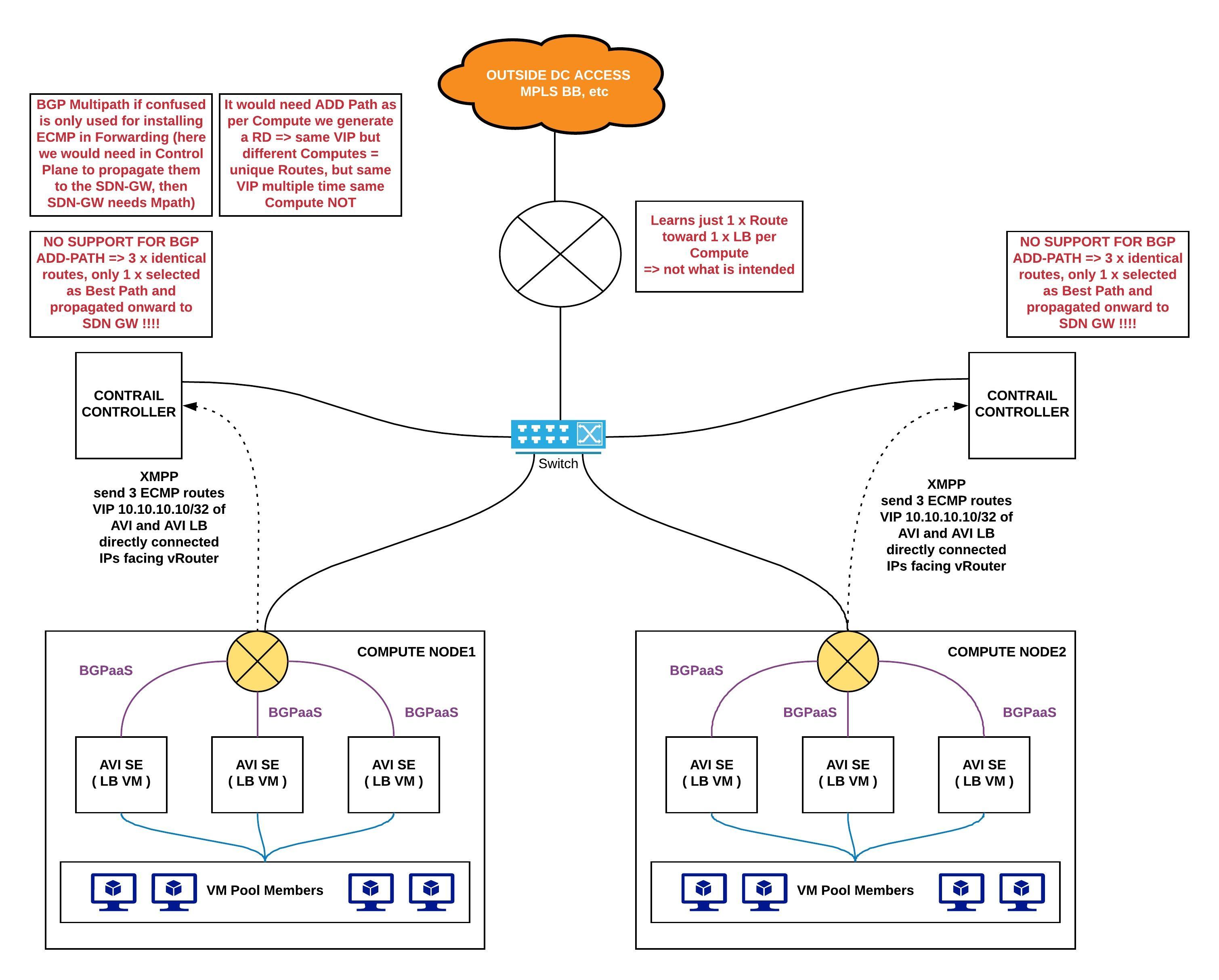 This one did not really work as initially expected. Contrail originates based on Compute Node a unique VPNv4 Route Distinguisher. This means that when:

then the Contrail Controller sees 3 identical routes and it learns just one which becomes the Best Path. In order to have accepted all 3 in the RIB (as the Controller does not forwarding) in would have needed BGP AddPath (currently not supported). Then if that would have been out of the way, then the SDN GW would have required BGP Multipath == install in FIB all learned paths. Of course propagating all those 3 routes onward to a Route Reflector in the backbone would again have required AddPath on the SDN GW as well (you have to think of these two features as Control Plane vs Forwarding Plane = Add Path vs Multipath). 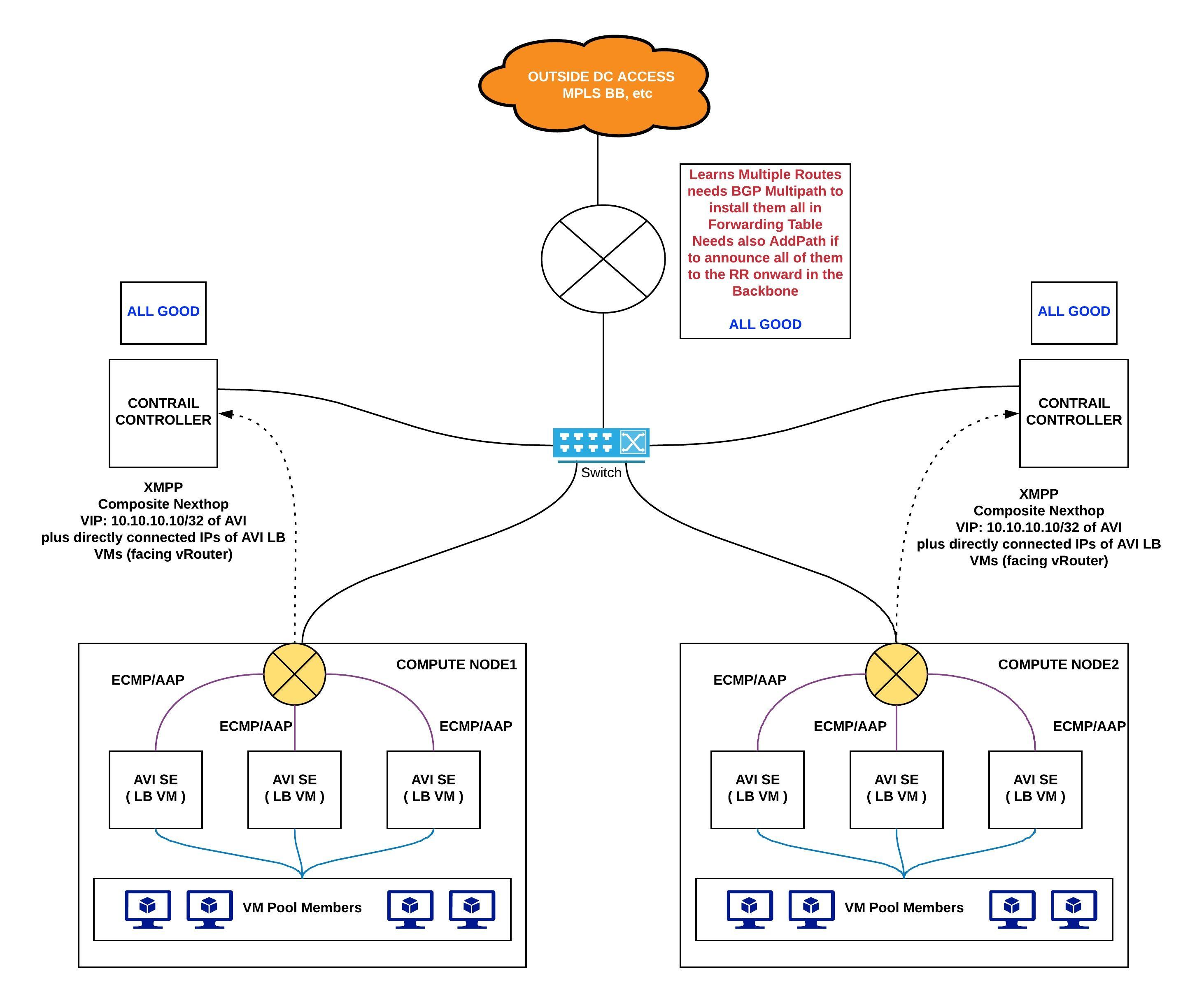 This one worked like a charm. AVI Controller takes care of everything and speaks to Contrail so you do not have to configure much. Just check when you are configuring a Virtual Service in it that AAP is enabled and proceed with your VIP. The Contrail vRouter will learn that VIP, regardless of whether it is in the same subnet as the one it has directly connected to the AVI VM or not. If multiple routes to the same VIP inside the same Compute, then it just creates an ECMP route at that level and propagates outside one route. Traffic will be load-balanced though despite this but of course you have less control over how it is distributed or can reach some asymmetry (which might break applications that are stateful and require both ways to come via the same LB but this problem is not a Contrail one, rather a generic application use case that has to be studied carefully before deploying). 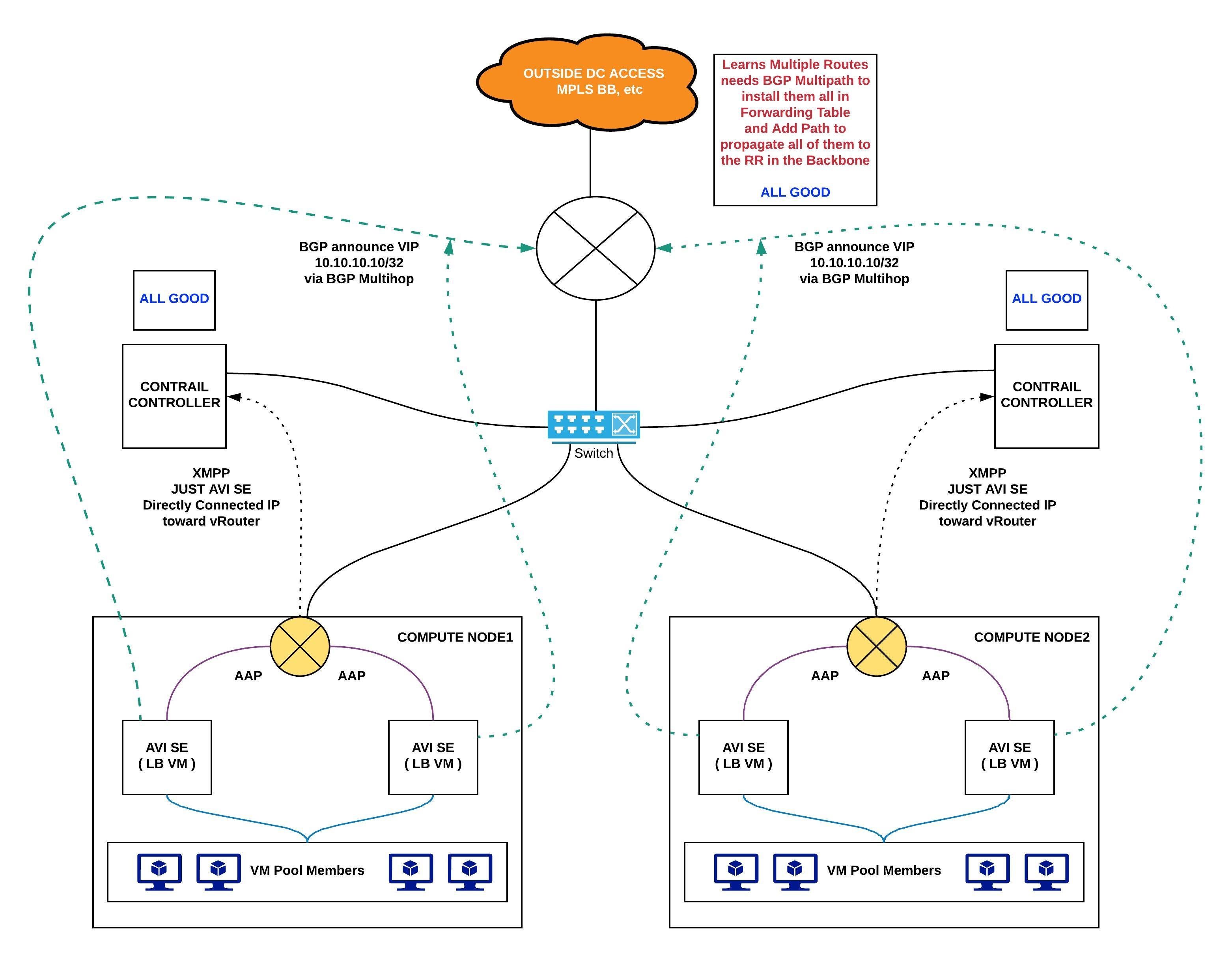 This is basically an iteration of the first scenario with the difference being that we peer Multihop, AVI VM directly to the SDN GW with a Loopback placed inside our VRF. That means we move the BGP Add-Path requirement to the SDN GW. That one will need it for learning and propagating to a Backbone Route Reflector multiple routes. For forwarding traffic over those equal cost paths it will need BGP Multipath. This means if you activate this two features, then you are on the safe side. I worried initially that the vRouter might drop return traffic but upon testing and a second thought…the vRouter is just doing MPLS Switching. The VIP is learning inside a VRF with NH = AVI LB VM directly connected IP facing vRouter. To those directly connected IPs we have LSPs built. The return traffic to the VIPs will just use the same MPLS labels as those directly connected IPs of the AVI SEs. 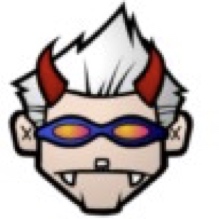 Network, Security, Servers, Openstack, Openshift. If there’s anything new and cool, then I like to learn about it. I’m also a fan of deep diving under the hood of a product to see what makes it tick, what leftovers from programming make it break and how it does its stuff.

This article is part of a bigger document that I wrote for myself with notes about Cisco ACI, Openshift, HP Synergy, 3PAR integration and contains the part I found most challenging considering I learned it from 0 in a rather constraining time interval and with some pressure.

As such I felt the need to document it and do a sort of braindump in order to avoid reinventing the wheel in the future in case I start forgetting.

AppleScript to connect Cisco Anyconnect plus PIN generated in MobilePASS

You know those moments when you need to connect to a corporate VPN and all the steps and clicks are just getting terribly annoying? Well I went through the same phase and decided to write something to make my life a tad easier.

As this is rather a draft version nothing will block the user from interfering. As such, if you want it to work successfully then please do not click around or do any action while the script is running in order to not change the focus of the window where it is doing its magic.

I’ll keep this one simple and put here two schemas that I found on the Internet for the concept of redo and undo logs in Oracle. I don’t know about other people but I work must easier with schemas and a few words rather than 100 pages long documents filled with just text.

What this is? Pretty simple…Juniper started off automating stuff via SLAX, something that did not get too much traction and then Python took the lead in front of it. It is an XML/Xpath based language and for simple things you can find it pretty useful and not so complicated to learn. What the script below does is effectively enabling a MIC upon its insertion into an MX5. Previously someone from operations would have to go manually on the device and enable it.

A customer asked me at some point if we could evaluate how the CoPP DDOS automated filters on a Juniper MX are triggered and how fast they respond to different types of packets. As such I needed to craft custom traffic. I was not very good at coming up with it for Ostinato or Spirent so I used Scapy to craft the packet. Afterward I took the packet hexdump and input it into Spirent / Ostinato as what the streams from there should generate (that hexdump has indeed all data needed, source/dst addresses included which meant of course that it needs to match what Spirent thinks it has on the interface facing the Juniper device).

Have you ever found yourself in a strange situation where:

Let’s say that with a big of creativity you can always find a way in. Here we go:

Contrail vRouter Interface down in GUI

Sometimes it may happen that when you look in Contrail at the interfaces on a vRouter (on a Compute host) that some of them appear down. This you can also see on the Compute Node itself with vif –list. There can be some leftovers and this is the way to clean them up:

Sometimes when playing in the Contrail GUI (eg. with EVPN-VXLAN settings via the Router object) you might trigger some problems with the objects in the internal contrail api database and then end up in an inconsistent state. This article aims at showing a simple way of cleaning that one up (in my case changing the VNI triggered a bug).